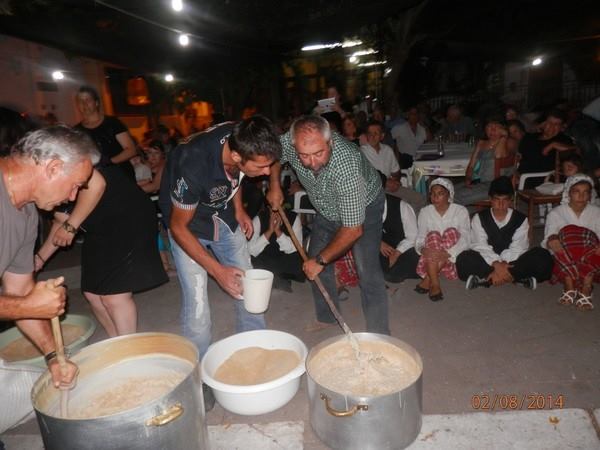 The festival of sardines in Skala Kalloni is particularly interesting. It is held every year on the first or second weekend of August and lasts three days.

The Kalloni sardines are famous in Greece and after the daily catch they are transported to the port of the village.

During the festival freshly grilled sardines are offered to tourists for free with plenty of ouzo accompanied with live traditional music and dance.

The Chestnut Festival is characteristic for November in Lesvos. It began in 2004 in Agiasos so as to promote agricultural production in the region.

Massive piles of chestnuts are gathered locally and guests have the opportunity to taste for free baked and boiled chestnuts or to buy this wonderful fruit from the producers.

The taverns and cafes are full of people and there is a festive atmosphere around the village. With thousands of visitors and tons of this delicious product of the region, the festival has already been an institution for this mountain village of Lesvos, as it always includes a lot of cultural events.

The Association distillers of Lesvos organizes every summer (usually in July) the International Ouzo Festival and promises a program of events that aims at the promotion of ouzo and Lesvos. The festival takes place both in the city of Mytilene, and in Molyvos, Perama and Plomari.

The Octopus Festival is held every summer (early August) in N. Kydonies, in Lesvos and is accompanied by musical events. N. Kydonies is located 23 km. north of Mytilene. The name of the village comes from the refugees who came there after the destruction of Asia Minor in 1922. They were from Ayvalık, Moschonisia and Menemeni.

The Fig Festival is held in September in the village Ippeios of Gera. The event includes traditional music, a presentation of the fig history in the area, exhibits with products from figs and various events such as a photo exhibition etc.

The Trachana Festival takes place in Akrasi of Lesvos in August. It includes the demonstration of the manufacturing process of Trachana (wheat meal boiled in milk and sun-dried) and other events, such as photo exhibition and traditional dance and song.

The Papalina Festival takes place at Kato Tritos, in Perama of Lesvos, at the end of July. Papalina is a type of sardine, smaller in size that is caught in the Kalloni Bay. The festival is accompanied by traditional dance groups and music.

The Aniseed Festival takes place in Lisvori in August. The aniseed is an essential ingredient of ouzo and the area of Lisvori is famous for the cultivation of this famous Mediterranean herb.

The Cheese Festival takes place every August in Mantamados. The village of Mantamados has a long tradition in dairy and cheese products. The event is accompanied with traditional music and dance.

Each year thousands of visitors from all over Greece and abroad visit the festival and have the opportunity to know, taste and trust fine local products through a long list of selected species which are presented. The festival is organized in August by the Natural History Museum of the Lesvos Petrified Forest in the museum premises.

During every tasting event the visitors of the Festival have unique taste experiences. Flavours, aromas and scents travel them through unique taste trails, giving them the chance to know the traditional products that are made by Women’s Agricultural Associations of Lesvos with recipes that they have inherited from their grandmothers and with local ingredients. Everything is prepared with care, love and joy and in this way the uniqueness of Lesvos is revealed through all the flavours

The Bull Festival is organized in Agia Paraskevi during the last weekend of June or the first of July and in Pigi during the second weekend of July. The slaughter of the bull is considered impressive and is a remnant of pre-Christian sacrifices. This custom has its roots in the 17th century, during which equestrian games take place. The traditional “kiskets” (meat with wheat), which is boiled in large cauldrons, is prepared and then distributed to visitors.

The Taxiarchis Festival takes place in Mantamados on the Sunday of the Holy Myrrhbearers. An ox is slaughtered and then the traditional “kiskets” (meat with wheat) is cooked. A vigil follows for the pilgrims. The Taxiarchis (Archangel) Festival is one of the biggest religious festivals of the island and pilgrims come from all over Greece.