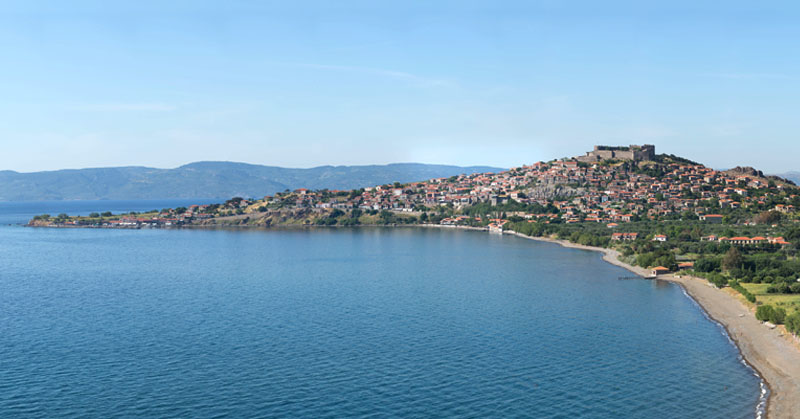 Lesvos island is located in the northeastern Aegean sea. It has an area of 1,632 km2 with 320 km of coastline, making it the third largest Greek island. It is separated from Asia Minor coast of Turkey by the narrow Mytilene Strait and till late Palaeolithic times was joined to the Anatolian mainland before the end of the last glacial period.

The population of Lesbos island is approximately 90,000, a third of whom live in its capital, Mytilene, in the southeastern part of the island. The remaining population is distributed in small towns and villages. The largest are Kalloni, Plomari, Agiassos, Polichnitos, Eresos, Petra, Molyvos (the ancient Mythimna).

Lesvos island hosts a wealth of geological heritage sites including the famous Petrified Forest of Lesvos, areas of natural beauty, rich ecosystems and a variety of cultural monuments. All these elements contributed to the island’s recognition as a UNESCO Global Geopark, the third site designation of UNESCO. The western peninsula of Lesvos island is dominated by the imposing Petrified Forest, which has been declared a Protected Natural Monument of Greece in 1985. Lesvos’ s ecological value is evidenced by three regions which have been included in the European Natura 2000 Network: “Western Peninsula-Petrified Forest”, “Kalloni Gulf Wetlands” and the “Gulf of Gera and Mount Olympus”. In Lesvos, one encounters prehistoric and historic archaeological monuments, medieval castles, Byzantine monasteries, and traditional villages. The rich architectural heritage is based on the use of local building materials which reflect the geological heritage and the natural environment.

Lesvos is the birthplace of many important luminaries in the arts and literature such as the poetess Sappho, the philosopher Theophrastus, the poet Alkaios, Pittacus the Philosopher, Terpandros the lyrist and the more recent G. Jakobides and the nobelist poet of the Aegean, Odysseas Elytis.

The Lesvos Geopark highlights the evidence of its geological natural and cultural heritage and sets the stage for visitors to familiarize themselves with a rich network of geological heritage sites and ecosystems, archaeological sites and monuments, as well as a variety of attractive museums and galleries.